*Reserving right to change my mind 10 months from now.

Thunderbirds
What: British sci-fi/adventure TV series with a cast of marionettes. In it, the International Rescue organization (made up of former astronaut Jeff Tracy and his five sons) thwart evil by using futuristic gadgets. They're helped by Lady Penelope, secret agent. Co-created by Gerry Anderson, who recently passed away.

Pros: Scripts were surprisingly ambitious and rarely talked down to its kid audience. Overall, a fun show.

Cons: Unsurprisingly, when your leads are marionettes, they can be rather stiff. It is rumored that Keanu Reeves was inspired to enter acting by the example of the show's cast. Members of the Tracy family have trouble walking convincingly, so they sit a lot. By modern standards, the pace can seem slow.

What: A variety of wine favored by a subset of aficionados known as "winos." To quote the Eugene Weekly, "The acetic and warm taste of Thunderbird is astringent in its nature. A cross between paint thinner and stale urine, this austere blend of god-knows-what is a sure way to make sure that you forget about whatever it is that just happened to you. This wine has legs, an unmistakable balance that is beyond words."

Pros: It is cheap, and will get you drunk quickly. According to Eugene Weekly, it "has legs," and therefore is one up on the Tracy family.

Cons: It's true that descriptions of fine wine are often bizarre. Wine Spectator recently gave a 91 points out of 100 to an Italian wine, describing it as having "layers of spicy underbrush, game, ash and dark tobacco notes." Because everyone loooooves the taste of ash. Nevertheless, most people don't like the taste of paint thinner and urine. Paint thinner is damaging to your average marionette. Drinking Thunderbird may lead to being inspired by Keanu Reeves. It could also lead to the inability to walk convincingly, causing you to sit a lot. Drinking excessively could make time seem to move slowly. (Note: Depending on point of view, this could be a Pro.)


Winner: Can we call this a draw? I can see enjoying a glass of Thunderbird while watching Thunderbirds.

If you have Netflix streaming and are into film, I'd recommend you check out "The Story of Film: An Odyssey," a 15-part program from U.K. TV. It's has a ton of clips from films I've read about but never seen, and the director/narrator has a unique point of view--it's more a personal essay on film history (with a strong emphasis on international film) than a straight recounting of what happened when. I'm now up to the fourth hour and will definitely watch all 15. There's an interview with director Mark Cousins here.

Peggy Lee would like to wish you a Happy New Year. That melody is gorgeous. (There's a good Regina Spektor cover, but I think the original is better.)

TCM is showing my favorite movie, A Matter of Life and Death, at 1:30 this afternoon, so act fast to record it to your DVR! (Actually, it's also on YouTube if you miss it: Part 1 and Part 2. But don't believe the person who posted it--the film isn't in the public domain.)

And, finally, here's a picture of Freddie opening Christmas presents: 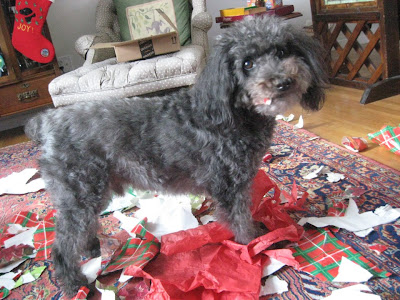