Odds and ends that I've linked to on my Facebook wall:

John Hodgman actually speaks the way he writes. (One reason I will always be a fan: I admiringly wrote about his first book--which I received as a gift shortly after his first Daily Show appearance--and he actually left a thank you in comments. Funny and classy--a nice combo. I've linked to it before, but if you've never seen it, do watch his TED talk. It's a fine piece of work.)

"Black Swan" = "Repulsion" + "The Red Shoes" X any random late-night Cinemax movie / any random David Cronenberg movie. Basically, it's complete hooey. There is nothing original in it at all. "The Red Shoes" is available on Netflix instant streaming, and "Repulsion" can be rented on disk, as can Cronenberg's "Videodrome." Watch those instead. (Oh, be warned--"Videodrome" is pretty out there. A co-worker once shied away from me for a while after she watched it on my recommendation.)

Norton Juster's "The Phantom Tollbooth" was by far my fave book as a kid. Good interview with him on The AV Club here.

A sneak peek at my upcoming novel in letters, an alternate history of the founding of this country had it been accomplished by sock monkeys

By the same Token that the Bearer hereof satt up with you last night I hereby order you to give him, as many Kisses bananas, and as many Hours of your Company after 9 O'Clock as he shall please to Demand and charge them to my Account: This Order, or Requisition call it which you will is in Consideration of a similar order Upon Aurelia for the like favour, and I presume I have good Right to draw upon you for the Kisses bananas as I have given two or three Millions at least, when one has been received, and of Consequence the Account between us is immensely in favour of yours,
John Adams
Octr. 4th. 1762


(If I am blowing your mind and you prefer to read them in their original form, you may find the letters between John and Abigail here.)

Posted by Jim Donahue at 8:23 AM No comments:

Calendars.com informs me that it's offering free shipping on 2012 calendars


Too soon, Calendars.com. Too soon.

Posted by Jim Donahue at 8:45 AM No comments:

"I think that it's insulting to insinuate that a candidate for president is less than serious," [Michele Bachmann] told [ABC News' Jonathan] Karl. "I'm a very serious individual." --Salon, on the candidate's reaction to Fox News anchor Chris Wallace statement that she's perceived by some to be a flake

Related: PolitiFact fact checks 23 Bachmann statements and finds only one of them to be completely true. (She's also darned good at insinuations. Darned good.)

Posted by Jim Donahue at 2:54 PM No comments:

The Velvet Blog explains it all for you


In which we make one of our periodic trips the the mailbag and address your search queries:

rodin vs. rodan
--Remind me again which one has radioactive breath? Rodin? Yes, Rodin.

tim polenta
--Remember: The key to palatability is LOTS of sauce.

Another rerun in honor of The Velvet Blog's seventh blogoversary, this one from April 29, 2005. I haven't done one of these Handy Visual Guides in ages, and have no idea why.

Polenta
WHAT?: Italian dish made from cornmeal.

CONS: Bland without the aforementioned sauce. Or butter. Lots and lots of butter.

CONS: Willing to spout crazy right-wing ideas but with little to no verve. Bland, even with sauce. Or butter. Even lots and lots of butter.


WINNER: Polenta, by a landslide. If the Republicans wise up and nominate polenta for president, then the race might be interesting.


EDITOR'S NOTE: Little to no posting for the coming week. Busy, busy.

Lost in the mail


From the NY Times, a postcard mystery.

The lost art of headline writing 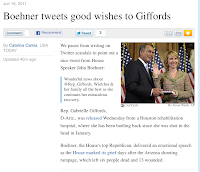 This was prominently displayed on Google News this morning. "Boehner tweets good wishes to Giffords." Really, USA Today? Is that where we are now in terms of news?

Here are a few alternative headlines:

--Unpaid Intern in Boehner's Office Uses Twitter for Boss in Between Looking for Duke Nukem Reviews and Stalking Ex-Girlfriend on Facebook
--Normal Civility Happened Online
--Why Hasn't Weiner Done Anything This Week?

If sock monkeys were hypnotists

Look into my eyes. You are getting sleepy, very sleepy ... Your eyelids are getting heavy, so heavy you cannot keep your eyes open. You try to get up from your chair, but you can't. You feel heavy, heavy, as if you can't move, like you just ate combo meal #5 at Taco Bell.

You are under my control. You will do anything I say.

Now, give me that banana.

This rerun, part of the seventh blogoversary extravaganza, was the first of TVB's many sock monkey posts, from Jan. 10, 2006. That's not a stock image, btw. He's one of ... um, let's just say "many" sock monkeys that live with me and leave it at that. 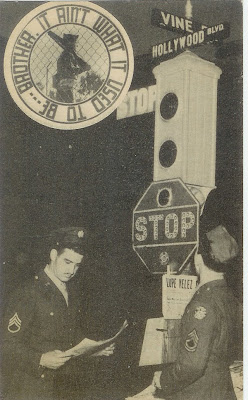 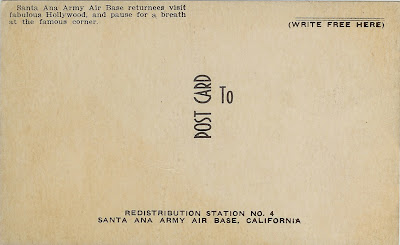 This is an odd one. First of all, that photo is horrendously murky, even for an old postcard. Plus, I guess this was given free to returning soldiers--the note on the back says (WRITE FREE HERE)--but that makes the legend added to front, BROTHER, IT AIN'T WHAT IT USED TO BE ..., even stranger. (Way to buck up morale!)

Look closely, and we can tell when the photo was taken. The headline on that newspaper says LUPE VELEZ, a Hollywood starlet born in Mexico. I have to assume that the story is about her death on Dec. 14, 1944, as I don't think she did anything else that would have made headlines.

Legend has it that Lupe drowned in her toilet after leaving a suicide note and taking an overdose of pills. But The Straight Dope finds that first detail hard to believe.

Even if it were true, the story of Marie Provost's demise is worse. (For the record, Nick Lowe exaggerates. But, then, all men are liars.)

A blogoversary rerun from May 9, 2008, in honor of the late Leonard Stern, one of the creators of Mad-Libs. (Also, a writer for "The Honeymooners" and "Get Smart.") Covers of the first three Mad-Lib books are here.

Which is the real "reality" show?


A rerun from March 13, 2006, so I hope you'll excuse what now appears to be a tasteless Jeff Conaway joke.

Celebrity Garage Sale: Down-on-their-luck celebs compete to see who can raise the most money to pay back taxes by holding a garage sale. Confirmed so far: Grease's Jeff Conaway and Project Runway's Wendy Pepper. Produced by Stanley "M.C. Hammer" Burrell. On TLC.

Celebrity Cooking Showdown: Celebs (yet to be named) team with famous chefs (including Wolfgang Puck) in an elimination cookoff. Produced by Sean "Diddy" Combs. On NBC.

Celebrity Rap-off: Celebs not known for their hustle or their flow are paired with former rap stars in a weekly elimination rap-off. Confirmed so far: Deborah Gibson, Young MC, Rick Springfield, Damon Wibley (from the Fat Boys). Produced by Robert "Vanilla Ice" Van Winkle. On VH1.

The answer to the quiz was the second one. (It bombed.) However, after I posted this originally, the first and fourth "fake" reality shows came to pass in one way or another, with other people. Actress Illeana Douglas filmed a pilot for a celebrity garage sale show for a cable channel (I'm not sure if it aired), and a VH1 did indeed air a series exactly like my suggestion, though none of those stars were involved. As far as I can tell, a celebrity paintball competition has not come to pass, at least not on TV.

Paul Potts
WHO?: Cell-phone salesman who, in 2007, became an everyman Britain's Got Talent winner and a ubiquitous YouTube sensation by singing arias in a vibrato-heavy tenor.

PROS: Brings opera to the masses.

CONS: Middlebrow entertainment posing as high art. Repertoire consists of the most overplayed of opera's "greatest hits" mixed with pop schlock. Is currently on tour in the U.S. with several other, even schlockier vocalists.

CONS: Believed to have killed 21% of his country's population, as many as 2.5 million people, by some estimates.


WINNER: All things considered, I've got to go with Paul Potts, even though the Times reports that in a recent NYC appearance he sang "First Time Ever I Saw Your Face" in Italian, with an operatic arrangement--which, last time I checked, violated the Geneva Conventions. Pol Pot's singing voice was reportedly quite "pitchy," but genocide is worse than the death of taste.

A rerun from July 14, 2009. You'd be surprised at the number of people who run Google searches on "pol pot paul potts" or some variant thereof. More Smackdowns at the label below.

Yes, because we need the eggs: A one-act documentary play


Older guy sitting at restaurant bar: My wife will have a margarita, and I'll have a sea breeze.

Bartender: Do you want a chicken?

Bartender: Do you want that shaken?

Everyone else sitting nearby [silently]: Oh ... "shaken."

Part of our Seventh Anniversary Blogstravaganza. From Nov. 9, 2008.

Maybe it was part of the sentencing?


Vanity license plate spotted in the parking lot at Lowe's:


Rerun of The Velvet Blog's first entry, from June 14, 2004, part of our Seventh Anniversary Blogstravaganza. Times were simpler then. Gas was 25 cents a gallon. An ice cream sundae--with extra sprinkles!--would set you back a nickel. And I tied an onion to my belt, which was the style at the time.

But, seriously, do you have any Vicodin?

Seven years of something or other


Did you realize that The Velvet Blog has been around for seven years? Seven!

Good God--what was I thinking? For the record, I believe my reasoning for signing up with Blogger was: "Hey, it's free."

I'd like to point out that the traditional seventh anniversary gift is either wool or copper. And we'll be celebrating with lots and lots of reruns this month.