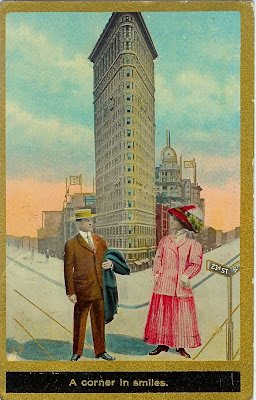 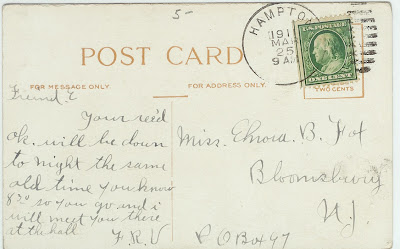 Your rec'd [?] ok. will be down to night the same old time you know 8 30 so you go and i will meet you there at the hall

That big wedge, for you non-NYers, was built in 1902 and is known as the Flatiron Building today, but was originally called the Fuller Building. It's at the triangle formed where 23rd Street, Broadway, and Fifth Avenue intersect. I used to work about a five minute walk from there. Some photos of it here.

Can anyone make out the addressee? "Miss Ehrora. B. Flot"? I love that, but it seems unlikely.

(Click to embiggen, and it's worth embiggening for both the psychedelic color and the look in the woman's eyes, which seem to say, "You???")

I think Fot. That little doo-hickey is on the F in "friend" too.
Very cool

Fot is even better than Flot!

If the last two letters of the name are OT, they're written unusually. The O leads into the crossbar, not the trunk, of the T.

I note that this was sent from Hampton, NJ to Bloomsbury, NJ (9.71 miles per mapquest) with the expectation that it would be read the same day it was posted. 1911 has something to be said for it.

I thought the surname might be "Fox", with a a very dashed-off "x" on the end.

Wow, if you Google "Elnora Fox" you get a lot of hits!

I say it's an Xhosa (or Fulani) girl named "Chronu B. Fraf", actually, quite a common girl's name among the West African tribes along the tributaries of the Okavanga Delta at the time, three years before the German occupation.

I can't imagine how she found herself in Bloomsbury, though. That's a total mystery.