According to the review in today's Times, the Sex and the City movie is 137 minutes. I've only seen the edited-for-basic-cable version of the series that TBS airs, and it never grabbed me. But even if you love the show ... 137 minutes of shoes and gossip and weird outfits? Thanks, but I'll be busy having bamboo shoots shoved under my fingernails that night. You go without me. We can meet for cosmos later.

I say light comedies should aim for 90 minutes and go as long as 105 if need be. (Could someone please let Judd Apatow know this was good enough for Preston Sturges, a better writer/director of comedies than he is? 135 minutes for movies like the director's cut of The 40-Year-Old Virgin is crazy. On the other hand, I could watch Sturges' The Lady Eve, a brisk 94 minutes, 100 times and not get tired of it.) Meatier comedies could go up to two hours, and not one second longer. Non-epic dramas really ought to be able to be told in 120 minutes, too, though I'll allow a cushion of 10 extra minutes. Popcorn flicks like Indiana Jones and the X-Men movies should keep it to two hours, too. (Last year's Transformers, based on a line of toys--a line of toys!!--clocked in at 144 minutes. I didn't see it, but for me, that sounds about 140 minutes too long, give or take.)

Epics ... well, once you go over two and half hours, my attention begins to flag, no matter how good the movie is. Lawrence of Arabia starts trying my patience around that point. Can we say two hours, 45 minutes? Oh, if you're David Lean, OK, OK, you can have three hours. But that is it, sir. (The only way I got through Bertolucci's The Last Emperor was with the help of an extra-large Coke and extra-large popcorn. That was the theatrical version, at 160 minutes. The DVD director's cut? 219. There isn't enough Coke in the world for that.)

The Lord of the Rings trilogy is a special case. The theatrical versions bored me a bit, to be honest (especially the second one). The DVD versions are longer ... yet somehow seem shorter. They flow better. But I could never watch any of them in one night--they must be split in two. Fortunately, all are divided over two disks. And yes, I get a lump in my throat at the end of The Return of the King.

The upcoming Steven Soderbergh movie about Che Guevara is four hours. Ugh. No way. It may get divided into two separate features, which sounds like a good idea.

Not that I'm dying to see two movies about Che. Cher, maybe.


GREAT-MINDS-THINK-ALIKE UPDATE: The New Yorker's Anthony Lane on the Sex and the City movie:

What followed was not strictly a movie. It was more like a TV show on steroids. The televised episodes, which ran from 1998 to 2004, lasted for no more than half an hour each. So, spare a thought for the director of the film, Michael Patrick King, who also wrote the screenplay. Faced with the flimsiest of concepts, he had to take it by both ends and pull until he stretched it out to two and a quarter hours. Two and a quarter! When Garbo made “Anna Karenina,” in 1935, she got happy, unhappy, loved, left, and under the train in less than a hundred minutes, so how the hell are her successors supposed to fill the time?

WWOD (What Would Oprah Do?)

I was flipping channels a few days ago and happened to alight on what looked like a new episode of Family Feud. Did you know it's now hosted by Seinfeld's Mr. Peterman? I didn't.

Anyway, the response to the survey question was rather odd. The question was something along the lines of "What person has most affected the world for good?"

When I tuned in, the only answer on the board was Ben Franklin--I wouldn't have thought of him--with something like 7 votes.

Given, perhaps, my Catholic upbringing and the current religious influence on the public discourse, the first name that popped into my head was Jesus. It seemed like a gimme.

The family in control of the board guessed Mother Theresa. Nope, not up there. And a couple more names that I can't remember, and they weren't on the board either.

The game switched to the rival family, and they said Martin Luther King Jr.--who was the #1 response, with something like 28 people in the survey giving that answer.

The rival family won, so Mr. Peterman started to reveal the other names.

As well as I can remember--and I think I might be missing one name--the results were in the neighborhood of:

Oh, sure, getting beaten by Oprah is understandable, but Ben Franklin? That's really gotta rankle.

Part of an occasional series in which we improve depressing or odd descriptions of vanity press books advertised in The New York Times Book Review by adding the phrase "Wacky high jinks ensue" at the end of them. All ad copy verbatim (except for the high jinks) from the May 25 issue.

A Rose Petal Taking the Heat. These pages are petals sculpted in notes of polarizing love, passionate lust, and political logic. Thinking is optional. Feel the moving thoughts of this exquisite collection of poetry. Wacky high jinks ensue.

The Lost Parable of Christ. What if Jesus came not as a man of peace, but a man of war? Join Jesus, His original disciples, and a chosen army of 300 in spiritual warfare as they defeat Caesar, conquer Rome, and establish a world government of the One True God in Jerusalem. Wacky high jinks ensue.

To make sure that the high jinks are indeed wacky, what if he traveled with His capuchin monkey, Fernando? I mean, as long as we're playing "what if?" here.
Posted by Jim Donahue at 9:42 AM 5 comments:

Sweet Mary, Mother of God, I just passed an Exxon station charging $4.19 for a gallon of regular gas

I can only go back to one of my favorite stupid news quotes, from an April issue of BusinessWeek last year (article not currently online):

"Everyone likes to hype $4 gasoline because it's sexy," says Tom Kloza, chief oil analyst for the Oil Price Information Service, an energy consulting firm. "The reality is that we're nearing the highs of the year, and within 30 days there will be more gasoline on the market. You might see $4 in tony places such as Beacon Hill or Beverly Hills, where they wear the price as a badge of honor."

One of these is real. Really.

A) A couple in a suburb of Chicago have been charged with child abuse for deliberately speaking only Klingon in front of their child, in an attempt to make that Star Trek language his first. "We were going to teach him English later," the father has protested. "What's the big deal?"

B) A man dressed up as Darth Vader, wearing a garbage bag for a cape, was charged with assaulting the founders of a Welsh group calling itself the Jedi church and was given a suspended sentence last week. The group, which claims about 30 members, says on its Web site that it uses "insight and knowledge" from the films as "a guide to living a better and more worthwhile life." The accused assailent claimed he couldn't remember the incident, having drunk the better part of a 2-1/2-gallon (10-liter) box of wine beforehand.

C) A man in rural New Zealand has legally changed his name to Bilbo Baggins and has built an exact replica of the fictional Baggins' home, as seen in Peter Jackson's Lord of the Rings trilogy. About half of the home's furnishings are actual props used in the films. The newly monikered Mr. Baggins has approached several doctors about the possibilty of having his legs surgically shortened, but has been turned down by all.
Posted by Jim Donahue at 8:35 AM 8 comments:


UPDATE: In retrospect, I should have linked to this interview with Bush for context, in which he tells of his decision to give up golf:

"I don't want some mom whose son may have recently died to see the commander in chief playing golf," he said. "I feel I owe it to the families to be in solidarity as best as I can with them. And I think playing golf during a war just sends the wrong signal."

One more thing, then I need to disappear for a few days

Remember when we were better than this?

Boy, do I miss those days.


UPDATE: To clarify, I didn't mean the subject line of this post to imply that I was about to be drugged and kidnapped by the government and taken to a secret prison, just that I won't be posting again till the weekend, at the earliest.

Let me say that again, for emphasis: Cablevision sucks.
Posted by Jim Donahue at 8:32 AM 2 comments:

The Velvet Blog hereby declares this the Song of the Summer

I think the Santogold track "L.E.S. Artistes" (scroll down to where it says "key track," and you can stream it) has been floating around blogs for a few months, but it just got a proper release. And I've been playing it nonstop lately. Is it just me, or is this an amazing single?

(I was originally going to link to the video on YouTube, but it's kind of disturbing. You can easily search for it, but consider yourself warned.)
Posted by Jim Donahue at 8:49 AM 2 comments:

Email ThisBlogThis!Share to TwitterShare to FacebookShare to Pinterest
Labels: music

UPDATE: For punkinsmom. Also, this. But, seriously, the TAL link above will clear this up.

If you're happy and you know it

So that's why I'm so miserable--I can't frame inequality in a positive (or at least neutral) light. I'll have to work on that.
Posted by Jim Donahue at 11:10 AM 4 comments:

Drudge, eat your heart out

About a month ago, I broke the news that Hillary Clinton is a mentally sick man from Calgary, Alberta.

But the conspiracy doesn't end there, my friends. Oh, no. Concerned reader God Is My Codependent, citizen journalist, has uncovered evidence that Laura Bush -- yes, the first lady of our nation! -- is also a nefarious Canadian dude:

Robert Gauthier is known to be Laura Bush by every Jewish rabbi to the world, and every mayor and leader of the world… and Robert Gauthier being Laura Bush proves to the world our Canada’s criminal record… you do not have a President in Washington, D.C. unless you truly are a mentally sick American news broadcaster.

(Note to stephanieandjohn in case you end up back here: I wanted to drop you a line that your loony correspondent has reached out elsewhere, but I couldn't find a link to your e-mail.)
Posted by Jim Donahue at 10:57 AM No comments:

There's a woman who works in my office whose haircut is a dead ringer for MC Hammer's 'do circa 1990.

It is not flattering.
Posted by Jim Donahue at 11:05 AM 2 comments:

Photo of the Day 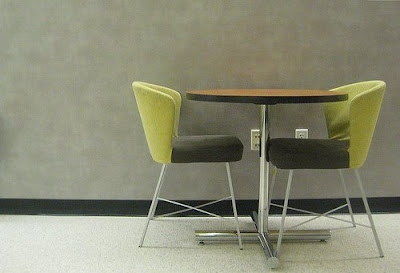 From the ongoing Office Life series.
Posted by Jim Donahue at 7:16 AM No comments: