I, for one, welcome our new zombie overlords


America votes with its wallet--

#343 on Amazon: Pride and Prejudice and Zombies (pre-orders; doesn't publish until May)

#68,786 on Amazon: Joe the Plumber: Fighting for the American Dream (in print now; he recently sold five copies at a book signing)

Advice to Sarah Palin: In your 2012 run, pick a zombie as your VP. They're much more popular.

How not to apologize (now with extra added updates!)

Bunning, a Hall-of-Fame major league pitcher, who has no medical background, said during a speech Saturday that Ginsburg has "bad cancer. The kind that you don't get better from," the Courier-Journal of Louisville reported. "Even though she was operated on, usually, nine months is the longest that anybody would live" with pancreatic cancer.

"I apologize if my comments offended Justice Ginsberg," the two-term Kentucky junior senator said Monday in a statement, which misspelled Ginsburg's name. "That certainly was not my intent." --The Associated Press

Nope. That's what I call a "nonapology apology." Any statement with the phrase "if my comments offended" is in no way, shape, or form an apology. It is a half-assed, weaselly way of pretending to say you're sorry when a) you're not and b) you don't really want to apologize.

You can't apologize for what someone else feels -- offended -- you can only apolgize for what you did or said. (You will now notice this phenomenon in about 95% of all public "apologies.")

AP, you're going to have to rewrite your lede. (I do, however, give you points for the "has no medical background" line. That was good.)

UPDATE: Another nonapology apology in the news:

... While [Bishop Richard] Williamson apologized in a statement Thursday to all those who took offense and for the distress he caused, the bishop did not specifically say that his comments were erroneous, or that he no longer believed them. As a result, Jewish leaders said the apology did not go far enough.

LOS ALAMITOS, Calif.—The mayor of Los Alamitos is coming under fire for an e-mail he sent out that depicts the White House lawn planted with watermelons, under the title "No Easter egg hunt this year."

Local businesswoman and city volunteer Keyanus Price, who is black, said Tuesday she received the e-mail from Mayor Dean Grose's personal account on Sunday and wants a public apology. ...

Grose confirmed to the AP that he sent the e-mail to Price and said he didn't mean to offend her. He said he was unaware of the racial stereotype that black people like watermelons. ...

"Bottom line is, we laugh at things and I didn't see this in the same light that she did," Grose told the AP. "I'm sorry. It wasn't sent to offend her personally—or anyone—from the standpoint of the African-American race."

Unaware of the stereotype? Reeeeally? Would you have been amused by and sent around an image of the White House lawn filled with, say, eggplants? Brussels sprouts? If not -- and, really, I'm going to go ahead and assume not -- why did you find watermelons funny?

I guess it's just a mystery.

The image the mayor sent around is here. And may I say: Holy shit!

I like Radio City the best of all. It is hotter in Lanc. than here, I'm sure, but rubber heels were pulled from the shoes of men & women by the sticky asphalt pavements here. 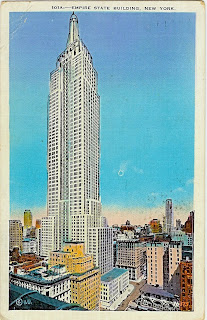 I'm probably in the minority of postcard collectors, but I snatch them up just as much (or more?) for the messages on the back as for the art. They're perfect little time capsules. This one's practically poetry. I think it's the artful use of the passive voice. 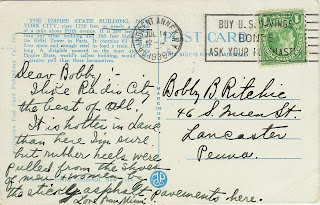 
Names of the day:

The lawsuit was filed on behalf of Pennsylvania residents Aaron and Christine Boring, who claimed that Google violated their privacy rights by taking pictures of their residence from a private road and publishing the images online. --InformationWeek

Email ThisBlogThis!Share to TwitterShare to FacebookShare to Pinterest
Labels: name of the day

Typo of the day

This enables Nokia to make a slime phone, ...

No wonder Nokia is stuggling these days. I just don't see the market.

Survival of the fittest


Given we just past Charles Darwin's 200th birthday (Happy Birthday, Chuck, and may I say you don't look a day over 175) and Valentine's Day, it seems the perfect time to link to Darwin's pros-and-cons list for marrying his first cousin, Mary.

My favorite pro: "Better than a dog, anyhow." My favorite con: "Less money for books."


This is to make up for the ridiculously cynical post below. I know it's too late to get this in for Valentine's Day, but if you're looking for a great romantic film that you've likely not seen before, put "I Know Where I'm Going!" into your Netflix queue. It's by Michael Powell and Emeric Pressburger, the same production team that made A Matter of Life and Death, which I know you've seen already, because ... well, because I told you to rent it last month. And, like AMOLAD, this is in my all-time top 10.

It stars a radiant Wendy Hiller and Roger Livesey (the doctor from AMOLAD again) and it was largely shot on location in Scotland in 1945. How often do you get to see what rural Scotland looked like in 1945?

Someone has actually posted the entire movie in 10-minute chunks on YouTube. That's not the best way to see this, obviously, but here's one scene I particularly like, from about midway through.

Know that Hiller's character has come to Scotland to marry her rich, older boyfriend, but that Livesey, the handsome-but-cash-poor lord of the island Hiller is trying to reach for the wedding, is proving too difficult to ignore. In this scene, while the boat to the island is delayed because of bad weather, Livesey takes her to a music-filled anniversary party. I love that piercing look he gives her as he quotes an old Scottish folk song that goes, "You're the maid for me." How could Hiller's character possibly resist? (About 3 minutes, 30 seconds into this video.)

Movie geek trivia: I said above that the film was shot on location, which is true. But Livesey was appearing in a play in London and couldn't get to Scotland, so everytime you see him in an outdoor scene, it's faked. Either it's a double in a long shot, or he's standing in front of a rear-projection screen. It's remarkably seamless.

I will convert all of you to become Powell & Pressburger fans yet ...


This was originally a playlist of 20 songs I put together for anti-Valentine's Day program for TVB correspondent God Is My Codependent's music streaming site.

Note: "Song for the Dumped," "Your Dictionary," and "You're Breaking My Heart" make this decidedly NSWF.

Unfortunately, I couldn't quite recreate the whole thing. Missing songs after this:

Missing in action: Jill Sobule, "When My Ship Comes In"; Richard Shindell, "Are You Happy Now?"; Nilsson, "Cuddly Toy"; Fountains of Wayne, "Hat and Feet"; Peter Holsapple and Chris Stamey, "I Want to Break Your Heart"; Jim Lauderdale, "Wake Up Screaming"; Matthew Sweet, "I Thought I Knew You"; Marshall Crenshaw, "I'm Sorry (But So Is Brenda Lee)." In addition, "Who Will the Next Fool Be?" should be sung by Charlie Rich, but I couldn't find that, either.
Posted by Jim Donahue at 9:34 AM 3 comments:

Recession seems to put people in the mood for condoms
Just wait till the stimulus package kicks in!


If you're like me, you often finish a novel and think to yourself, "Well, that was good. But it would have been so much better with zombies."

Words cannot express how much I am looking forward to this.

This whole concept opens whole new vistas. I eagerly await a zombified version of Gone With the Wind in which Scarlett O'Hara eats Rhett Butler's brain. Or a version of Great Expectations in which Miss Havisham gets her revenge in ways more physical than in Dickens' overly genteel version.

In comments, please let me know what novel you'd improve with zombies, and, if you'd like to, why.

UPDATE: A word from the publisher:

Video via Areas of My Expertise.

And a programming note: Posting will be light for the foreseeable future.

How can we miss you when you won't go away?

Joe the Plumber advises GOP-ers
Fresh off his stint as a war correspondent in Gaza, Joe the Plumber is now doing political strategy with Republicans.

When GOP congressional aides gather Tuesday morning for a meeting of the Conservative Working Group, Samuel Joseph Wurzelbacher – more commonly known as Joe the Plumber — will be their featured guest. This group is an organization of conservative Capitol Hill staffers who meet regularly to chart GOP strategy for the week. --Politico

Somewhere, John McCain is fixing a toilet and swearing quietly under his breath.

Theories as to why Creedence Clearwater Revival's "Chronicle" best-of collection has been No. 1 on iTunes for the last few days


--They put a spell on you.
--There's a bad moon on the rise.
--People have seen the rain and are wondering who is going to stop it.