Sorry for the light posting, all you five people who still read this blog. Busy, busy.

Coming up, though, we have highlights from a 1958 Good Housekeeping cookbook that must be seen to be disbelieved.

I leave you with this question: It's 10 p.m--do you know where your wiener is?

PS: For you few hardy souls still left here: I'm not above groveling. If you like a post, it would be very much appreciated if you'd share it on Facebook or Twitter. You'll notice I've added buttons at bottoms of posts to make that easy. [/grovel]
Posted by Jim Donahue at 12:30 PM 3 comments:

Headline of the day 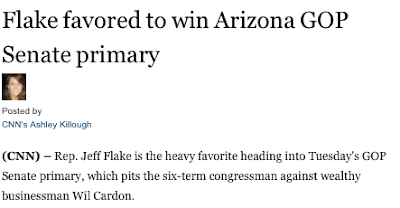 
Is it just me or has this summer had an unusual number of deaths of public figures?

Usually, the deaths of the famous don't really affect me that much. Oh, if it's someone I was a fan of, I'll be sad for a little while, but that's it. But every once in a while, the passing of a writer or musician or artist of some sort hits me hard. About a decade ago, it was singer/songwriter Elliott Smith. I'm not even sure why. I mean, I liked him--but I only had one album of his, and I wasn't exactly an Elliott Smith Super Fan. Still, something about his music had burrowed deeply enough into my psyche to make his untimely death feel like it had happened to someone I knew well.

And, this summer, I find myself shaken by the death of writer David Rakoff. Perhaps it's the intimate nature of radio, where I first encountered him, on This American Life. I often listen to that show, on which he was a frequent guest, in my car--and now, on my iPod--where it can feel as if the person speaking is talking directly to me. Whatever the cause, his work has been on my mind a lot lately.

The most recent episode of This American Life is embedded below. It gives an overview of his work for that show, and includes a short excerpt of him reading from his last book, to be published this fall. He was very ill by the time it was recorded--he has to strain to speak--and as the piece deals with the death of one of the main characters of the novel ... well, I was listening to it while eating dinner out, by myself, and I found myself getting weepy. Tearing up while eating a salad at Fairway is not something I was expecting to do last night.

I recommend that you listen to the whole program, but if you just have time to listen to a part of the show, make it the excerpt of the novel, 41 minutes in, if only so that I'm not the only one with tears in his eyes.

The difference between us, per Google Autocomplete

You're quite the patriotic go-getter. I have self-esteem issues. 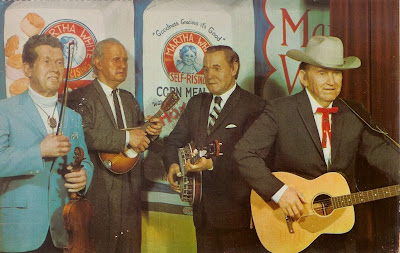 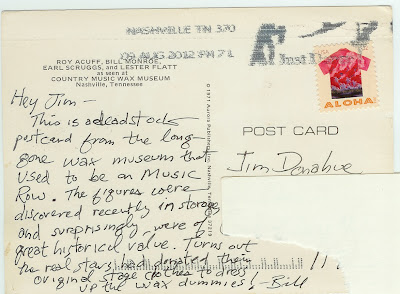 This is a deadstock postcard from the long-gone wax museum that used to be on Music Row. The figures were discovered recently in storage and surprisingly were of great historical value. Turns out the real stars had donated their original stage clothes to dress up the wax dummies! --Bill

Bill DeMain is in the pop duo Swan Dive and also gives tours in Nashville (see: Walkin' Nashville), which sound like a lot of fun.

Pros: A broadcast pioneer, breaking the notorious banana ceiling. If he were still working, his commentary for the recent Olympics broadcast would have been much better than that of Bob Costas. Painted cover of Mad magazine. Contrary to rumor, didn't bite Martha Raye.

Cons: Did, however, bite Al Feldstein, editor of Mad magazine. Per Wikipedia (whence all info in this post comes), a Russian newspaper described Muggs as "a symbol of the American way of life. … Muggs is necessary in order that the average American should not look into reports on rising taxes, and decreasing pay, but rather laugh at the funny mug of a chimpanzee." In that way, he served the same function that Keeping Up With the Kardashians does today. 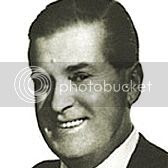 Pros: Wrote or co-wrote the standards "Santa Claus Is Coming to Town," "You Go to My Head," "Love Letters in the Sand," and "For All We Know."

Cons: Not the "For All We Know" that the Carpenters did. That was Fred Karlin, Robb Royer, and Jimmy Griffin. May have bitten Martha Raye (although I just made that up.)


Winner: Are you kidding? J. Fred Muggs, of course. He was a chimp who co-hosted the Today show!


From a restaurant review in the Times:

The New American menu at First and South, featuring salads and local fish, is typical Hamptons-style fare, but with a twist. Few, if any, other Long Island menus offer crispy duck tongues, for instance.

I'd rather have a good old-fashioned M. Night Shyamalan twist than a crispy duck tongue.

The duck tongue was dead the whole time!!!

Or, perhaps: The duck tongue is calling from inside the house!!!

Song of the day

Insanely catchy. And I'm not just saying that because my photo goes by at around the 19-second mark. Co-written by Bill DeMain (of Swan Dive, much plugged here) and David Mead, who's on vocals.

Posted by Jim Donahue at 6:21 PM No comments:


Little Lulu: Step Up 2 Reform School: When a prank on Tubby Tompkins goes sour (leading to face transplant for Tubby), Lulu is sent to for-profit reform school, where she is tormented by one of the owners, a nephew of the Koch brothers.

Top Cat: The Cat Who Shagged Me: After it's pointed out that he's a total ripoff of The Phil Silvers Show, Top Cat isolates himself in his apartment and slowly goes insane. After it's pointed out that this, in turn, is a ripoff of Roman Polanski's Repulsion, Top Cat enters into a spiral of degradation, which ends when he becomes male prostitute aimed at the cosplay market.

Richie Rich: Get Rich or Die Trying: Richie meddles with the Cali drug cartel and dies.

Posted by Jim Donahue at 6:57 PM No comments:

You don't have to put on the redress

Congress shall make no law respecting an establishment of religion, or prohibiting the free exercise thereof; or abridging the freedom of speech, or of the press; or the right of the people peaceably to assemble, and to petition the Government for a redress of grievances.