Folks across the Net are finding the product placement for Subway in Monday's episode of Hawaii Five O to be pretty ridiculous, and with good reason (because it is ridiculous):

But I'd like to point out this used to be the norm. Netflix was, until recently, streaming episodes of Burns and Allen, and I caught a few before they disappeared. Twice in every episode, the plot is interrupted by plugs for Carnation:

And, yes, the Flintstones used to shill for Winston cigarettes during the first season of the show. The bits weren't integrated into the dialogue quite like Burns and Allen, but the ads looked like part of the show:

Well, this post has been extra tiring, for some reason. I think I'm going to relax, put up my feet, and enjoy some delicious Lindt chocolates. Mmmmm. They sure are good!


Yeah, yeah. I know, it's not really breaking news.

But a comment on this USA Today story caught my eye, boiling down what's wrong with the Internet to its essence. Headline:

Comment on said story, and note that the person leaving the comment is around 60 years old, uses his real name and photo (he's on Facebook), and is a USA Today "Top Commenter."

There are certain people who pine for a return to the America of the 1950s, lulled by false sense of what the country was like at that time (or eager to return to a time when people knew their place in society).

All I'm saying is, I'd be happy if we merely returned to a time when the only way to comment on news stories was by bothering the bejesus out of family members or yelling on street corners. 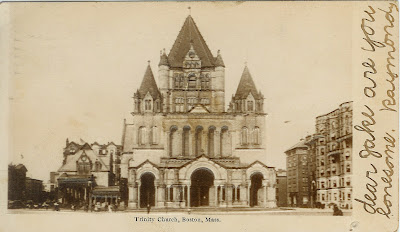 dear Jake are you lonesome. Raymond

The debates are just getting ridiculous now


Haven't listened yet, but I see the new The Projection Booth podcast features a discussion of what has become my favorite bad movie, The Apple, with director Menahem Golan and star Catherine Mary Stewart.


Things are crazy busy. Expect even-lighter-than-usual posting for a bit.

Here, enjoy this song by Jeremy Messermith [sic], as animated by Eric Power:

Here's a link to a live thing Messersmith did for NPR. A friend recommended him recently, and I'm really digging.

Posted by Jim Donahue at 9:32 AM No comments:

Email ThisBlogThis!Share to TwitterShare to FacebookShare to Pinterest
Labels: music

Mysterious postcard message of the day 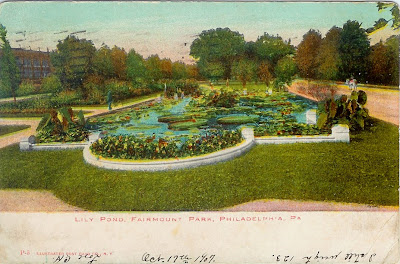 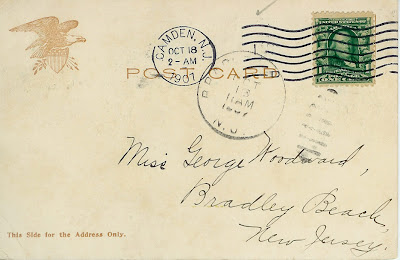 In case you can't make that out, the message is written upside down, around the right-side-up date, on the front of the card. Odd.

As late as the early 20th century, you couldn't write on the side of the postcard where the address is written--I'm not sure why, or when the regulations changed.


Various news headlines, from Google News, on the surge that is Santorum:

I hereby declare a moratorium.

My uncle stayed in the area last year. He showed me a picture.


Oh, After Last Season--you are truly the gift that keeps on giving.

Concerned reader God Is My Codependent noticed that the trailer embedded in my 2009 review of the oddball film After Last Season was "removed for copyright violations" from YouTube.

I did find another copy that had not been taken down:

But I also noticed that, mysteriously, a new trailer went up last spring, one that attempts (with only limited success) to make the decidedly crazy movie look more linear and conventional:

I can only assume that the producers, hoping to recoup some of the $5 million spent on this curiosity, are trying to persuade a distributor to release it and capture some of that sweet, sweet midnight-screenings-of-Birdemic cash. They even spent money on new graphics.

So far, no luck, as I see on the Amazon page that the DVD for After Last Season is no longer available.

But, oh, the comments of the film's supporters sure are enthusiastic, and not in an ironic reviews vein, either.

This one comes from Chris anr8:

This movie isn't the most visually stunning film.

With a budget of $5 million, the entire movie will not look like the recent Green Lantern film which costs about $200 million to make. But the movie has some very realistic and frightening moments created through special effects.

It goes beyond being just a small thriller. The experience achieved by the movie is sometimes disturbing ...

And you lost me again.

You won't be able to tell the difference between what is real and what is not real by the middle of the movie.

And, again, true, if you mean reality in general and not this movie.

A bad, baffling movie walks into a bar ...

At the end of the movie, you begin to understand why some scenes and some sets appear so outrageous. After Last Season stars Jason Kulas (who plays Matt), Peggy McClellan (who plays Sarah), Scott Winters (Dr. Marlen), Casey McDougal (Anne), Joan-Marie Dewsnap, William York and Tristan Cole. In the future, the main characters are tied to some murders and use a new technology.

Actually, no. That's a dream. A dream that takes up about 40% of the movie and doesn't actually affect the plot at all.

They filmed the movie on 35mm and it is rated PG-13. The DVD has 5.1 surround sound (which is neat for many parts of the movie.).

Well, the weird sonic murk did freak out my dog several times.

This one from Alex 510 has the subject line "Nonstop entertainment":

From the opening, After Last Season starts to grab your attention. The movie doesn't resemble your standard movie. Events start to happen that are mysterious and baffling. You see a snapshot of the lives of the characters. Jason Kulas as Matt introduces you to a new world of technology. Peggy McClellan as Sarah shows you a dimension of technology that you have never seen before. They are fascinating. and for some of us who are young at heart or teenagers, humor is present in the story. The other actors like Scott Winters, Joan-marie Dewsnap and Casey McDougal are serious and funny. Great way to spend a Friday evening.

Lindsay says this is a "great way to escape your life":

Took a break and watched the movie. Loved the movie. A view of the future mixed with some thriller. I recommend it to anyone who wants to get away from their busy life or who wants to spend an evening watching a movie.

A breakthrough--how did producers never think of that before?! A movie that's intended to be watched!

James C. says it "keeps you on the edge of your seat":

Not a masterpiece. Not an action flick. Still has some action in it and it will keep you on the edge of your seat. Low budget movie with adrenaline. I wish I could have seen this movie inside a theater when it was released in 2009. The effects you get from the movie would have been ten times greater. Excellent DVD. Well worth the money.

In order to stay on the edge of your seat without falling off, please use a seatbelt. Otherwise, you may pass out and fall off.

But my favorite comes from J. Rollit:

After Last Season was not what I expected it to be. It appears to be something then as you watch it; ...


An incomprehensible attempt at making a movie by someone who has no idea how movies work?

it turns into something else.

It looks like the people behind the movie went out of their way to create a different kind of movie.


Yes. An unwatchable one.

Some scenes contain the simplest sets. The computer animation is primitive one moment and sophisticated in others. The special effects are plain and visible one minute and the next they are photo-realistic.

OK, now you're not even trying to be believable.

It seems like the director wanted to leave just enough clues in the dialogues and designs to tell the viewers what is going on. It looks like he may have left too few hints because if you don't pay attention to the dialogues, you can easily lose track of the plot. I watched the latest trailer on the official web site and that helped me understand what is going on.

You know the names of some of the characters right away.

He's got me there. That really does help.

Needless to say, you don't have to understand the whole plot to be captivated by the movie. It is thrilling and scary just by watching it.

As opposed to say, thrilling and scary by just staring at the DVD case.

Thanks, J. Rollit! I look forward to your guest-hosting gig on Sneak Previews, but only because it's no longer on the air.

Could a mystery candidate for GOP race still emerge?

Republicans this year have the best chance of defeating a sitting Democratic president since Ronald Reagan toppled Jimmy Carter more than three decades ago, but Democratic heavyweights are quietly celebrating the fact that, given Tuesday night's caucus results, that task has just become harder. ...

Where do Republicans go from here in their search for a nominee? There appear to be three possible scenarios:

(2) The possibility: A more conservative candidate takes it away from Romney (25% likelihood). ...

(3) The long shot: Someone else enters the campaign (10% chance or less). Normally, this late in the game, a new entrant to the contest would be the stuff of science fiction. But conservative voters seem to be singularly dismayed by the choices in front of them ...

Mystery Candidate--the thrilling new Milton Bradley game of romance and mystery that's just for you and you and you!

Mystery Candidate--Will you be ready for swimming … or a dance? closing down an abortion clinic or busting a union? When you open the door, will your Mystery Candidate be a dream … or a dud Randian superman or a RINO?

Remember: Milton Bradley makes the best games in the world. So, girls …

Open the door for your Mystery Candidate!

Email ThisBlogThis!Share to TwitterShare to FacebookShare to Pinterest
Labels: politics

Visitors from Wo'C may also enjoy examinations of The Apple, After Last Season, and Birdemic.

I'm so glad the Republican nomination will be wrapped up today.


Wait ... that's wrong? I'm going to have to continue hearing about this? Oh.

Posted by Jim Donahue at 9:27 AM No comments: