The three phases of pie 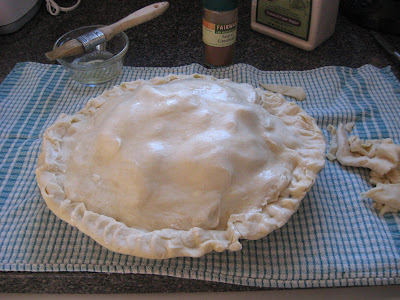 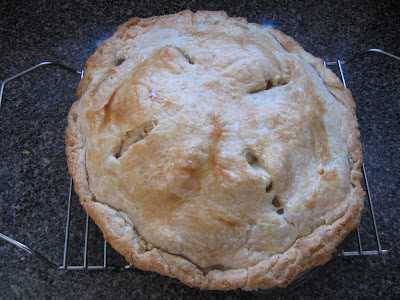 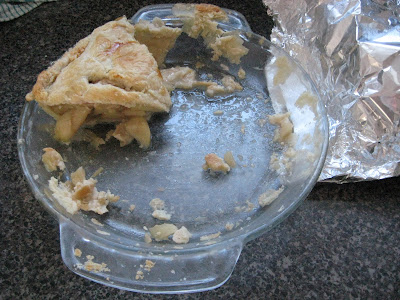 But don't quote me on it


I came across this absolutely amazing story of plagiarism yesterday (part 2 of the story is here--be sure to scroll down for the admitted plagiarist's explanation). Short version: A debut novelist plagiarized his entire spy opus from around a dozen sources (including Robert Ludlum and post-Fleming James Bond novels), creating a "new" work by changing character names and that's about all. This inspired me to respond to IMs from concerned reader God Is My Codependent only in repurposed statements today. Given that I don't want to be accused of plagiarism, I'm fully annotating my responses.

Me: I think for the rest of the day, I'm only going to send you plagiarized IMs.

GIMC: Did you plagiarize that one?

Me: No. I haven't started yet.

GIMC: I've got plots for novels that I think are good, yet I don't think I am capable of writing them. Still, it never occurred to me to find bits and pieces of other novels and try to fit them into my plot.

Me: Most writers will have trouble with writer's block at some point in their lives. The possible reasons for writer's block are myriad: fear, anxiety, a life change, the end of a project, the beginning of a project . . . almost anything, it seems, can cause that debilitating feeling of fear and frustration. [1]

GIMC: I'd be more afraid of being caught as a plagiarist.

Me: Students who want to plagiarize can do so with little fear of getting caught. It is just a matter of increasing the effort put into it. However, with anti-plagiarism tools available, no student should want to plagiarize at all because the effort and time required to avoid detection is equal to or greater than the effort of creating an original work. [2]

GIMC: Where are you getting this?

GIMC: You should do a TVB post entitled, "Some thoughts on democracy" and just post the Declaration of Independence.

GIMC: Small Change got rained on with his own thirty-eight and no one's gone over to close his eyes. [5]

GIMC: But what's your opinion of it?

ME: The fourth release in Tom Waits' series of skid row travelogues, Small Change proves to be the archetypal album of his '70s work. [7]

GIMC: OK, plagiarize the answer to this: Are you off Friday?

I think we can all agree that the experiment was a rousing success--you really can't tell that I reused earlier works!


Odds and ends I posted on Facebook but not here:

Why is a faux Cookie Monster's explanation of Occupy--left in a comment at the AV Club, no less--the best one I've read so far?

Most embarrassing news error I've seen in ages--TV reporter accuses meat market of selling dog meat, but it's actually duck meat. (More info on how this happened here. The TV station has not, as far as I can tell, actually issued a correction on air.)

The wonderful Darlene Love on why she doesn't hate Phil Spector (though she certainly has good reason to). Bonus Darlene, singing "River Deep, Mountain High."

The Doors sing the theme to Reading Rainbow.

Donate to the USO so a soldier can get a phone card to call home for the holidays.

Perhaps the way out of our economic mess is to tax zombies at a higher rate.


You know what that means: It's time to rerun the post on my Scottish grandma's oatmeal stuffing recipe:

My mom used to make her mom's oatmeal stuffing every Thanksgiving. Since my sister took over T-day duties and doesn't like the oatmeal stuffing (she makes the bread variety), well, I miss it a lot. The stuffing's not bad in a chicken--I've done it--but somehow it's tastier in a turkey.

The recipe is simplicity itself: Saute a chopped medium onion (or, if you're feeling fancy, a big shallot) and rib of celery in oil. Add salt and pepper and two cups of rolled oats or quick-cooking oats and continue sauteing until the oatmeal gets toasty. Then stuff the turkey. (Obviously, you can cut this in half for a chicken. Or bake it in a covered dish alongside the bird with some chicken stock to keep it moist.)

Maybe you had to grow up with this to love it, but I do.


Sometimes you start reading a news story and think it's odd, and you keep reading only to find it turning into a whole different level of weirdness, provoking the Five Stages of Incredulity.

And, yes, this is one of those stories:

MIAMI — One too many bouts of flatulence and cramping has led a Florida inmate to sue the Department of Corrections, arguing that the prison’s soy-based turkey dogs and sloppy Joes amount to cruel and unusual punishment.


Stage 1: Surprise. A prisoner is suing because he farts too much?

Eric D. Harris, 34, who is serving a life sentence for sexual battery on a child, said the soy in his prison chow is threatening his health by endangering his thyroid and immune system. Florida prisons serve meals with 50 percent soy and 50 percent poultry three times a day, a mixture that costs half as much as using beef and pork, the Department of Corrections says. The cost per meal: $1.70 a day for each inmate. ...


Stage 2: Astonishment. It's possible to feed an adult for $1.70 a day? And couldn't the prison get it down to about 10 cents by just feeding bread and water, if that's it's aiming for, and I suspect it is? Or, you know, encourage cannibalism for those who really demand meat?


Stage 3: Bafflement. It's better to have a prison full of hostile, half-starved prisoners than spring for a ham sandwich occasionally? And the spokeswoman for the Florida Department of Corrections is named Gretl? Also, could you please make this story weirder? And can I bold the weird part to make it stand out even more?

“Excessive soy can be toxic to the thyroid gland,” said Sally Fallon Morell, the president and treasurer of the Weston A. Price Foundation, a nonprofit group that advocates a diet of whole, largely unprocessed foods and food high in saturated fats, and is publicizing the lawsuit. “It can have hormonal effects.”


Stage 4: Disbelief. There's a nonprofit group devoted to eating gobs of butter? And it's suing on behalf of prisoners sick of eating soy dogs? You're not making this up?

Knowing that Weston A. Price was a real person, you might suspect that he was a nutritionist. One that encourages you to put an extra pat of butter on your steak, but still a nutritionist of some sort. So, let's check his bio:

Slogan: Survival of the tastiest.

Here he is in action. Oh, and be prepared to cringe:

My favorite part is when he pats that "native" like a piece of meat and says, "You look as though you were a child! My, my!"

So, Weston A. Price Foundation, can you state your admiration for third world peoples in way that is strikingly creepy?

These primitives with their fine bodies, homogeneous reproduction, emotional stability and freedom from degenerative ills stand forth in sharp contrast to those subsisting on the impoverished foods of civilization-sugar, white flour, pasteurized milk and convenience foods filled with extenders and additives.

Oh, Dr. Price, you had me at "primitives with fine bodies." The "homogeneous reproduction" is just the lard-based icing on the beef-tallow cake.

Stage 5: Wonderment. Where did I put the vodka? 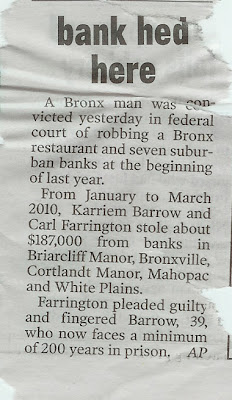 I surreptitiously tore this out of the paper (on, I think, p. 5!) while waiting for a haircut this morning. I've had nightmares of letting a dummy headline through at the magazine where I work. But--yay!--it hasn't happened in waking life.

Also, it couldn't have happened to a nicer newspaper.


I checked Facebook this morning and noticed a co-worker I'll call X--someone I interact with only via email and IM--posted that she'd been laid off. I was shocked--there haven't been any rumors of layoffs.

I asked a another co-worker, someone who works with X directly, and he was dumbfounded. He spotted her on IM and asked what's up. She hasn't been laid off.

Our first thought was that her account had been hacked--there's certainly a lot of that going around. But then I looked at X's account and noticed that it said she lived in California. "Where does X live?" I asked my co-worker. "South Carolina," he replied.

Yes, I am "friends" with someone who has the same name as my co-worker but is in fact a complete stranger. Furthermore, I've been "friends" with this person since spring of 2010. She never posts about work--till now--so I didn't suspect anything was amiss.

And the kicker: I have another co-worker who's a mutual Facebook friend of this Fake X. I have no clue who friended whom first.

I'm pretty sure there's a lesson here about friends and the cybersphere, but I'll let you draw your own.

UPDATE: So it turns out that the Facebook friend that Fake X and I have in common actually knows two people by the name of X. I'm guessing I saw the wrong one on my friend's wall, assumed it was the one I knew, and made a friend request. And for some reason, Fake X accepted.