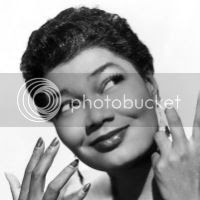 Pearl Bailey
Who: American singer/actress/frequent talk show guest/writer. She was featured in Carmen Jones and Porgy and Bess on the big screen, and played Broadway. As a kid in the '70s, I'd watch her in her many talk show appearances on Mike Douglas, Merv Griffin, and the like (nothing that I could find on YouTube, which is surprising); she also appeared on The Carol Burnett Show, The Muppet Show, and many other variety shows. She wrote a best-selling memoir called The Raw Pearl, as well as the puzzlingly titled Hurry Up, America, and Spit. She won the Presidential Medal of Freedom in 1988 and passed away in 1990.

Cons: Did I mention she published a book called Hurry Up, America, and Spit? Take it from a publishing professional: That's a lousy title. 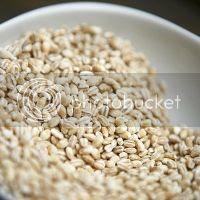 What: Barley is in the grass family; pearl barley has its hull and bran taken off.

Pros: Mark Bittman's mushroom barley soup might be the best soup in the world. No kidding.

Cons: Carol Channing replaced pearl barley in an avant garde production of mushrooom barley soup and did not win a Tony award. Odds of opening barley and finding a pearl are extremely small.

Posted by Jim Donahue at 9:58 AM No comments: