News story of the day:

CARLISLE, Pa. - A central Pennsylvania man has been charged for a second time with trying to steal a rack of ribs by shoving them down his pants.

Carlisle police tell The Sentinel newspaper that 65-year-old Donald Noone tried to hide about $20 worth of ribs in his pants on Sunday. Police say he attempted to pull the same stunt on May 22 at a supermarket and pleaded guilty to retail theft and public drunkenness.

Police say that since this is a second offense, the theft charge will be considered a more serious second-degree misdemeanor.

There was not a listed telephone number for Donald Noone in Carlisle.


I'm going to give this fellow the benefit of the doubt and assume it's a low-tech attempt at sous vide.

You asked for it! Again!


Odd Google searches that have brought visitors to the shores of The Velvet Blog, with commentary:

claus von bulow is he still alive
You have no idea. (OK, that's just Jeremy Irons' last line in Reversal of Fortune. But it's true.)

santa claus headshot
Auditioning for a modeling job in the off season? I'm going to suggest: blue steel.

CAR OF DEVIL GO TO HELL WITH ALL YOUR LABOURS
I believe the search term you were looking for is "Chevy Nova."

opening banana
"There is a train everyday leaving either way/There is a world, you know/And there is a way to go/And we'll soon be gone, it's just as well/This is my opening banana." This answers the age-old question, what if Jackson Browne had written "My Opening Banana" instead of "My Opening Farewell"?

how about dinner? I know this great Vietnamese restaurant
"If I could afford it, I'd have 10 cats."


A rerun, from September 2005, because it seemed appropriate.

Folks in the Northeast should expect rivers turning to blood and a plague of frogs this weekend. Bad combination--get out those wading boots! Better yet, stay indoors, as these are mutant killer frogs that shoot laser beams out of their eyes. Whatever you do, don't say "ribbit, ribbit" at them--they hate that.

Farther down the coast, stock up on the Rid and Raid, because Doppler 3000 Color Radar is showing huge clouds of lice and flies. Really, it's not looking good, so stay inside and think about cutting off your hair and wearing lots of layers. Did I mention these are biting flies? Well, they are.

Cattle will be falling over dead in the Midwest today, and it looks like anthrax. Get those windows sealed, OK? And remember: Shallow breaths mean the spores don't go too deeply into your lungs.

Southern California should expect a plague of boils. Man, that couldn't be a worse place, could it? Expect slowdowns in the entire entertainment industry throughout the region.

Folks in Texas and New Mexico need to stock up on rock salt, because a massive hailstorm will be coming their way. Better yet, stay in the basement, because these babies will be as big as canned hams.

The Pacific Northwest can count on a constant stream of giant locusts this weekend. Make sure you have large pots of grain--I hear you can appease the Locust God that way.

Folks in Alaska endure awfully long nights for most of the year. Well, they better get used to it, because there will be no light in the state at all from now on. Have lots of candles ready. Those scented ones are great, aren't they? They really set a mood. Autumn Pumpkin Spice from Ye Olde Yankee Candle Shoppe is especially nice.

And last, it looks like firstborns will be dying off just about everywhere. My advice? Duct tape, and lots of it.

Well, that's about all for the weather. Steve, over to you for sports.


The earth, that is. Never felt an earthquake before.

Yeah, it was just a tiny wee quake here on L.I., and it got me out of the office for half an hour, so I'm not complaining.


Who wrote this, and to whom? (Some items redacted by me. Also, I've already spoiled this on Facebook, so no fair cheating.)

UPDATE: We have a winner, so I've unredacted the text.

First, I would like to introduce myself. I am Elvis Presley and admire you and have great respect for your office. I talked to Vice President Agnew in Palm Springs three weeks ago and expressed my concern for our country. The drug culture, the hippie elements, the SDS, Black Panthers, etc. do not consider me as their enemy or as they call it the establishment. I call it America and I love it. Sir, I can and will be of any service that I can to help the country out. I have no concern or motives other than helping the country out.

So I wish not to be given a title or an appointed position. I can and will do more good if I were made a Federal Agent at Large and I will help out by doing it my way through my communications with people of all ages. First and foremost, I am an entertainer, but all I need is the Federal credentials. I am on this plane with Senator George Murphy and we have been discussing the problems that our country is faced with.

Sir, I am staying at the Washington Hotel, Room 505-506-507. I have two men who work with me by the name of Jerry Schilling and Sonny West. I am registered under the name of Jon Burrows. I will be here for as long as long as it takes to get the credentials of a Federal Agent. I have done an in-depth study of drug abuse and Communist brainwashing techniques and I am right in the middle of the whole thing where I can and will do the most good.

I am Glad to help just so long as it is kept very private. You can have your staff or whomever call me anytime today, tonight, or tomorrow. I was nominated this coming year one of America's Ten Most Outstanding Young Men. That will be in January 18 in my home town of Memphis, Tennessee. I am sending you the short autobiography about myself so you can better understand this approach. I would love to meet you just to say hello if you're not too busy.

P. S. I believe that you, Sir, were one of the Top Ten Outstanding Men of America also.

I have a personal gift for you which I would like to present to you and you can accept it or I will keep it for you until you can take it. 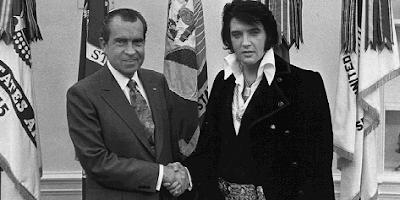 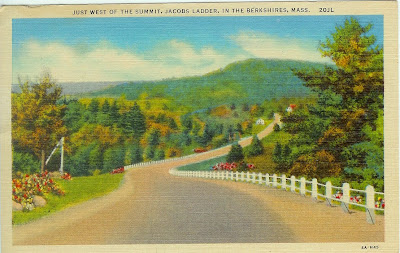 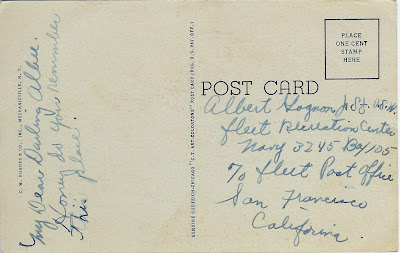 Honey do you remember this place.

More from the ongoing Gagnon postcard saga here, here, and (probably, based on the location) here.


Odds and ends, mostly odds, and mostly stuff from my Facebook posts:

How America turned poverty into a crime.

Fran Healy, of the band Travis.

Headline of the day.

There are a surprising number of images of monkeys and apes using typewriters.

I'd guesstimate we're at approximately Fahrenheit 450 these days


I was a bookish kid. (Big surprise, right?) I remember getting rather pissed off at my mom--herself a big reader, I must point out--for saying at one point that I "read too much." I found that very offensive, though it's possible that she may have had a point. (I didn't exactly get out a lot.)

I'd tend to find a writer I like, then read everything I could get my hands on by that person. Around junior high, that writer was Ray Bradbury. The Martian Chronicles led to Something Wicked This Way Comes which led to Fahrenheit 451. In high school, it was, among a handful of others, Kurt Vonnegut.

So when I read the other day that a college professor (!) spearheaded a successful drive to get Slaughterhouse Five and other books removed from the classrooms and shelves of a high school in Republic, Mo.--a school in which the professor has no children enrolled because, of course, he home-schools them (sigh)--I was really saddened.

My HS library had all of Vonnegut's books, and I read every single one then on its shelves. And while it's true that in my 20s I felt I kind of outgrew his books and probably haven't read one since then, they were a big part of my realization that there was a big, crazy world out there outside of my small-ish town. For that, I'm still grateful to whoever was picking the books to stock.

And, therefore, I've made a small donation to the Kurt Vonnegut Memorial Library, which is soliciting funds to put copies of Slaughterhouse Five into the hands of any Republic High School student who requests one. Maybe you'll be inspired to do so, too.

Email ThisBlogThis!Share to TwitterShare to FacebookShare to Pinterest
Labels: books

Little more than a year ago, most Americans did not know enough about the Tea Party to have an opinion. Now, more people have opinions, and they are hardly positive.

The percentage of people with an unfavorable view of the Tea Party in a New York Times/CBS News Poll this week was higher than it has been since the first time the question was asked, in April 2010. Forty percent of those polled this week characterized their view as “not favorable,” compared with 18 percent in the first poll. ...

Matt Kibbe, the president of FreedomWorks, the libertarian advocacy group that has encouraged the growth of the Tea Party movement, said he was not surprised that the negative views had grown, and blamed that change on attacks from Democrats during the debt-ceiling debate.

“It’s almost a mantra with Democrats,” he said, “ ‘Call them Tea Party extremists.’ It’s the inevitable price you pay for having an impact.” -- The New York Times


Also the inevitable price for, you know, being extremists.


This is the busiest time of the year for me at work. I'd apologize for lack of posting through mid-Septemberish, but given my readership has dwindled to people doing Google searches on variations of "yogurt poop," I doubt that's going to be much of a problem.

And here's a rather odd, lounge-singer-style cover I recently came across, by Laura Ainsworth:

I can't decide if I like this or not.