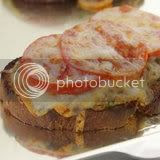 Aw. I never knew you were such a trekky. I've got such a crush on the new Spock. mmm! yummy!

Always order with mayo on the side, reduces the yuck factor.

You are weirder than me.

Not all that easy to do.

I've decided to take that as a compliment.

Excellent. That's how it was intended.

I'm totally with you on the hot mayo thing, Two Busy. *gag*

If the broiler is hot enough, the cheese creates a protective layer to keep the heat away from the mayo. At least, the mayo that isn't in direct contact with the cheese, so that's like 90% less gross. Right?